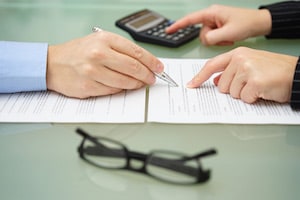 After assurances are given and consideration paid (or if the person promised reasonably relies on the promise and takes action) a contract is formed. Contracts can be in writing, verbal and potentially implied by the actions of the parties. While oral and implied contracts are more difficult to prove, legal action can be taken when such contracts are breached, resulting in a breach of fiduciary duty partnership.

If an investor opens an account with a financial firm and is led to believe his or her account will be handled in a certain manner, a contract, therefore, exists between the financial firm and the client. When the account is not handled as promised and losses occur, the investor can consider legal action.

When most investment accounts are opened a new account agreement is almost always signed. This agreement usually exists in addition to promises made to the clients. Most claims against brokers and other investment advisors involve a breach of both written agreements and oral promises.

Regulation of the securities industry is delegated by the Securities Exchange Commission (SEC) to self-regulatory organizations (SROs), primarily the Financial Industry Regulatory Authority. The FINRA and other SROs have rules and regulations designed to protect investors. Brokers and their Broker-Dealers have to have contractual agreements with FINRA and other SROs to become stockbrokers/financial advisors and member firms. Investors are the intended third-party beneficiaries of these contracts with the regulators.

The concept of a contract began in Roman times. With the advent of market economies, written agreements to perform tasks in the future in exchange for present time payments became necessary. After a hiatus in the Dark Ages, the need for contracts returned. Contract laws grew throughout Europe because of the rise of the merchant industry, both land-based and on the waters. These merchants, traders, and transporters created systems for their commercial endeavors. Around the 1200s courts catering to merchants began to appear at various trade fairs or other formal gatherings where goods would be exchanged. These courts were presided over by fellow merchants who were privy to the customs and norms of that industry.

After the 1200s, it was England, with its "common law" that really expanded and addressed the issues of the contract as we know it today. Two principals emerged known as "debt" and "covenant". For example, if payment was owed, under a contract, for products or services, something called a debt action could be instituted in a court of law. Under the same premise, a breach of a promise could be litigated. If the contract was under Seal, an action of covenant could be filed.

Most laws of the time covered formal contracts. There was little in the way to address informal contracts. By the 1400s, courts started to seek remedies to cover these situations. By the 1500s, courts of the common-law developed the legal remedy of assumpsit, which in Latin roughly translates to an "undertaking." It initially started as a means of recovering monies for the performance of a task/service in a negligent fashion. Having established broad-gauged remedies, the courts then needed to limit its scope. The common-law system then developed a limiting tenet in the precept known as "consideration." The ideology behind consideration was that, generally speaking, an agreement was not binding unless there was payment or tangential value given in its exchange. Interestingly, the consideration need not be of a value equal to what was promised. However, the consideration must be of some worth.

Modern contract law is the same. There are 5 principles. To begin with, there has to be an "offer". Wherein one party offers something. Next, there has to be an "acceptance" by the counter-party. The third element is the above-described consideration. The fourth principle is known as "mutuality of obligation". This term is generally defined as the duty for both parties to perform some act. It cannot be one-sided. For example, Party A pays a fee and Party B performs a service. Lastly, both parties have to be competent and have the capacity to enter into the contract.

Practice Areas
Client Reviews
★★★★★
"I am going to miss conversations with you, Sam Edwards. You’ve been a wonderful lawyer and a friend. I loved learning legal jargon from you. But, even more, it is your self-respect and commitment to your position that I admire and your persistent patience-your equanimity. With great appreciation, thank you!" M.B.
★★★★★
"My experience with Ryan Cook has been very positive. Through every step of the litigation he explained what to expect to happen. When I spoke with him later he reviewed the process. He was very patient, and I never felt rushed. I have already told friends how wonderful he is." L.R.
★★★★★
"I want you to know that I very much appreciate your expertise, hard work, and guidance that led to a satisfactory resolution with Raymond James. From our first meeting, I felt "heard" and that my situation and story were respected. Every subsequent interaction I had with any of you - in person, via email, or by phone - only corroborated that feeling. What great work you do on behalf of people like me who have been wronged, yet don't know how to navigate the appeals/mediation/arbitration process as you do. I will be forever grateful." M.L.
★★★★★
"Good positive experience. Guided us through a difficult process and was pleased with the outcome. Everyone I dealt with was exceptional." A.G.
★★★★★
"Good intelligent attorneys who never miss a beat. I set my expectations high, and they delivered above and beyond. Do not miss the opportunity to let SSEK represent you. Top-notch, efficient and effective firm." S.M.
View More
Submit a Law Firm Client Review